Wealthy Landowners – the story of the Ito Residence

The Agano River is a great river that flows through the broad Kanbara Plain. On its banks lies a small village called Soumi. Here, in the middle of the Edo Period (1603-1868), using agriculture as a springboard, the Ito family began their ascent. The family’s agricultural prosperity increased with each generation until they became the largest landowners in the Echigo region.
The land reforms following the end of the Second World War meant that their huge estate was taken out of the family’s hands. However, in order to leave the buildings, garden and works of art to future generations, the family set up the Northern Culture Museum Foundation to which it donated its fortune.
To give you a brief glimpse into the history of the Ito family, here is the story of the Ito Residence.

The history of the Ito family begins in 1756.

In 1756, Bunkichi the first, then aged 20, founded his own, separate branch of the family. He was given approx. 3,000㎡ of agricultural land – an area about the same size as that of the ground in the Tokyo Dome Stadium – and moved into a house with two six-tatami-mat rooms and a kitchen. Shortly afterwards he married Kiyo, the daughter of a dyer, and went into the indigo trade alongside farming.
In 1801, Bunkichi’s son Yasujiro inherited his father’s name to become Bunkichi the second at the age of 35. This second Bunkichi was permitted to take a surname and wear a sword in 1837. He decided to call himself Bunkichi Ito. At about the same time, trading under the company name of “Iwano-ya,” he expanded the business to include cereals, pawnbroker and warehousing as well as indigo. He gave up farming and became the richest merchant in the region.
Bunkichi adopted Tamejiro, the son of his second wife’s previous husband, and Tamejiro, now the third Bunkichi, became the founder of the Ito family line. However Saroku, who should have become the fourth Bunkichi, died when he was only 44 years old. It was therefore the third Bunkichi’s grandson, Younosuke, who succeeded to the family name, becoming the fifth Bunkichi when he was only sixteen. 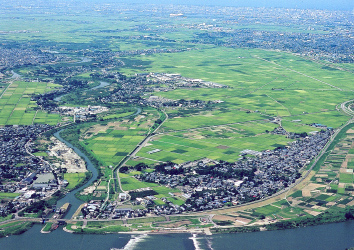 Soumi is an area with longstanding ties to the Ito family.
In the foreground is the Agano River, the great river which is the pride of Niigata. Above meanders the smaller Koagano River. Soumi is the long, narrow village sandwiched in between. For 77 years, starting in 1610, here was a house where a Japanese feudal lord lived known as Soumi Castle, and Soumi prospered as a modest castle town of 11,000 Koku rice yields, about 1,650t.  Thereafter Soumi came under shogunate control. A magistrate’s office was set up, after which Soumi became the territory of Ohama, direct retainer of the shogun. At the start of the Meiji Period, in 1869, when the land and people were returned from the feudal lords to the Emperor, the samurai society came to an end ushering in the period in which the Ito family rose to prominence.

Ito Residence – completed in 1889, after eight years of building work

The Edo Period gave way to the Meiji (1868-1912). In 1882, the fifth Bunkichi began to construct a new Ito residence on an approx. 18,000㎡ plot of land. Building materials were bought and brought down from as far afield as Aizu, Yamagata and Akita and eight years later, in 1889, the present Ito Residence was finished.
Kenjiro, who became the sixth Bunkichi, displayed extraordinary ability as a rich merchant. In 1892, when he married a bride from the noble Murayama family, the magnificent wedding banquet lasted three days and nights. Though Bunkichi continued steadily to expand the family’s domain, he died in 1903, when he was 33.
At only eight years old, his second son, Atsuo, became the seventh Bunkichi and head of the household. With the support of the family the young Bunkichi readily assumed his role as a landowner and acquired more land. By 1908, the estate covered 1,385 hectares (equivalent to the area of 300 Tokyo Domes!), and 60 servants and retainers of the Ito family lived in the family house premises.
The Meiji Period was followed by the Taisho (1912-1926). After graduating from Keio University, the seventh Bunkichi went to the United States to continue his studies at Pennsylvania University. His son, Yoshihiko, the future eighth Bunkichi, was born shortly after his return in 1927. 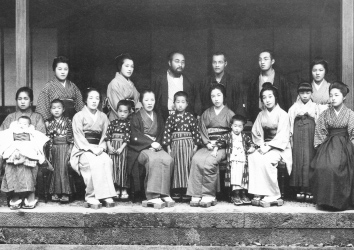 June, 1904. In the middle you can see the seventh head of the family when he was still a young boy.
On the left is Kii, his grandmother, and on the right is his mother, Masago. Kii was a member of the Oshiki family from the nearby former village of Chinoyama and came as a bride to the Ito family when she was thirteen years old. She bore at least ten children. After the death of her husband, the fifth head of the family, and despite being a woman, she held the reins of power in the household for many years and under her management the estate grew to cover nearly 1000 hectares. Masago belonged to the noble Murayama family from the former town of Takayanagi-machi. This was an old family of higher social status than the Ito family at that time. She married when she was sixteen. After the death of her husband, the sixth Bunkichi, she looked after the family with the help of her mother-in-law, Kii.
The well-built gentleman at the back is Kurota Ito who acted as the guardian of the seventh Bunkichi until the latter came of age. Kurota was the younger brother of the sixth Bunkichi. Later he formed a separate branch of the Ito family in Minamihama where he became the head of the new household. The Ito house from that time in Minamihama is now the Niigata branch of the Northern Culture Museum.

From Residence to Museum

The Northern Culture Museum came into being when a foundation was established in 1946.

After the Second World War, it was no longer possible to visualize the sort of future as a landowner which had seemed natural in the past, and the seventh head of the household decided to create a museum and to donate to it his entire fortune.
The plan to preserve what was left of the Ito home as a museum and to leave it to posterity came to fruition thanks to the efforts of many people. An encounter with First Lieutenant Ralph Wright of the post-war occupying forces was particularly crucial. After the war, the Ito Residence became a private museum and entered a new phase of its history as the first private Museum.” The famous landscape gardener Taiami Tanaka, who had developed a trusting relationship with the seventh Bunkichi through their long association, spent five years creating a garden in harmony with the rich landowner’s house. As time went on, the house gradually acquired more of the attributes of a museum.
The name “Northern Culture Museum” is derived from the Nordiska Museet or Nordic Museum in Sweden. The name reflects the desire to create a museum along the lines of the Swedish museum, in which ideal objects from the Royal Family’s enormous collection were placed in an ideal setting so that just by looking at them people could gain an understanding of the meaning and value of the culture the museum hoped to preserve and pass on. 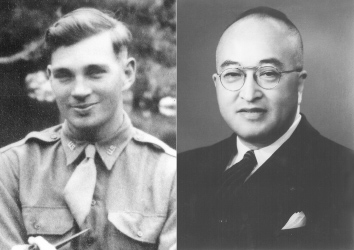 Immediately after the war, when First Lieutenant Wright of the occupation forces came to the Ito house to make enquiries about the family and the estate, he realized that, by an amazing coincidence, Bunkichi had been his senior at Pennsylvania University, his own alma mater. The two men became friends. First Lieutenant Wright considered that the Ito Residence was a valuable cultural legacy and threw his weight behind the Northern Culture Museum project from its inception. Post-war, the Northern Culture Museum also became a place in which the bonds of friendship between the US and Japan were forged once again.
According to the eighth Bunkichi, this is what Wright said: “Treasures which can be bought for money can be passed from hand to hand and preserved that way, but Japanese people’s way of life and culture can’t just be put in a box. Let’s keep these as they are by means of this foundation centered on the Ito family. Please preserve their way of life, not for the sake of the Ito family, but for the sake of all Japanese people. And not as a public institution.”

Further Developments as a Museum

In 1952, the eighth Bunkichi became a member of the inaugural class of Japanese museum curators and after working for a time in a company, took over the Bunkichi title at the age of 31. Thereafter he devoted all his time and energy to the promotion of the culture of Niigata and international exchanges, visiting over one hundred countries to observe cultural administrations and museum management all over the world. He also entertained numerous VIPs at the museum, including members of the Imperial family. In 2008, the museum even hosted the reception for the meeting of the G8 Labour and Employment Ministers. Bunkichi also sought to make the museum a place of mental and spiritual healing by providing an outdoor concert stage, restaurants and accommodation. In this way, he encouraged its evolution in response to the wishes of the present generation. Beloved and missed by many people, the eighth Bunkichi passed away in October 2016.

The Northern Culture Museum is what is left of the 250-year history of the Ito family. The museum continues to pass on its history and the culture it has nurtured to local people from Niigata, as well as to visitors from the rest of Japan and all over the world. 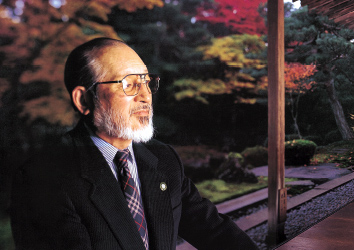 “Are you searching for a spiritual feast?” Welcome to the museum.
As the head of the museum, Bunkichi cherished the opportunity of once-in-a- lifetime encounters with visitors. Always bearing in mind the precepts of his father, the seventh Bunkichi, he continually sought to bring the Northern Culture Museum ever closer to perfection.